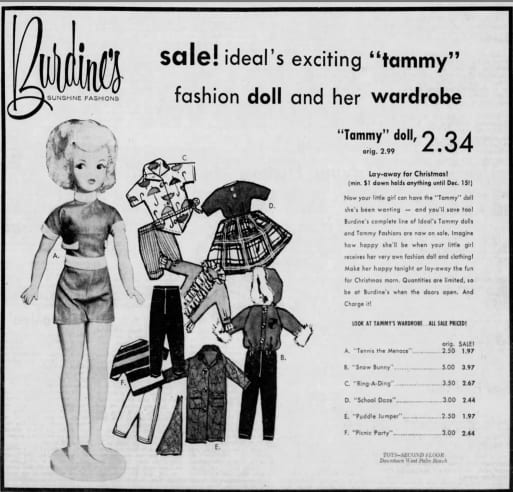 What is a Tammy doll, and when was she around?

Ideal’s Tammy Doll was intended to be the more down to earth competitor to Barbie. To modern eyes, 16-year-old Tammy looks nearly as glamorous as Barbie with her red lips, side-glancing eyes, and if you are lucky enough to score one in good condition, fabulous hairdo.

However, unlike Barbie the working professional, Tammy was just a regular girl — albeit “the Ideal teen” as the catchy commercial put it — and she even had an entire family to prove it: Mom, Dad, Brother Ted, forgotten brother Pete, and most memorably, freckled little sister Pepper all completed the set. Other friends rare and less so were made in the short window of 1962 to 1966. Naturally, so were countless outfits, accessories, and some bigger items such as Tammy’s convertible, Tammy’s house, and Pepper’s treehouse.

(Perhaps yielding to the power of Barbie, Tammy eventually got a “studio” where she could become a “cover girl” by taking her photo with the included real, branded camera.)

Tammy deserved a longer life, but perhaps if she were still being made today, she wouldn’t be so charmingly retro. Not to mention, she inspired the more enduring UK Sindy Doll.

Here is a short guide to the friend and family of this cult classic doll. For more details, please check out the following links: My Tammy Doll blogspot, dollsdollsdolls.net, and dollreference.com‘s Tammy page. They include detailed identification guides if you are trying to ID your doll better.

Tammy doll 1962 and 1963: During Tammy’s first two years, she was made with straight, unbendable legs and her torso did not swivel. She had subtle high heeled (“fashion”) feet.

Pos’N Tammy: Tammy had to learn to move someday! Her legs had wires, and her hair was initially longer and fuller than OG Tammy.

Grown up Tammy: Released in 1965, this Tammy is skinnier and has a more “modern” haircut. She was released in a straight legged version, a Pos’n, and an African American one that now sells for hundreds of dollars.

Tammy’s dad: Tammy’s dad can share clothes with his son Ted. He shares similar mild smile to his son, but has more wrinkles and gently grayed plastic hair.

Tammy’s mom: Tammy and her mom can share clothes. She seems to always have an up-do of sorts. She looks off to the side in a serene manner, and has a face mold similar to friend Misty.

Tammy’s sister Pepper: Straight-legged in her first release, she seems to be the most popular member of Tammy’s family and friends — she looks like Tammy, but only nine inches tall with a sprinkle of freckles. According to the even more catchy commercial, Pepper “that pretty little pixie gets into a lot of mischief such as sliding down banisters and “doing homework with the phonograph on.” But didn’t the name “Pepper” kind of suggest that all along?

In another commercial introducing Tammy’s family, Pepper is described as being eight years old. She looks more like she’s supposed to be ten or 11.

Pos’N Pepper: There were several versions of her, as well as some later Peppers that were straight-legged, but skinnier. Apparently there are rare Pepper dolls without freckles , but that feels wrong.

Tammy’s brother Ted: Ted seems to have a mild smile, and the ability to share clothes with Tammy’s dad. He awkwardly looks rather like Tammy’s boyfriend Bud, but Ted is fairly easy to find, and sells for $20-30, or even less. In one commercial, Ted is described as being 17 years old. He had straight legs.

Tammy’s brother Pete: Pete is the most forgotten member of the main family. He seems to be identical to Pepper’s friend Salty. I have never seen him listed for sale. He isn’t even mentioned in the commercial below, perhaps because he did not exist in a straight-legged style.

Tammy’s friend Misty: Misty has a side glance, and a smaller head than Tammy. She was intended to be more specifically glamorous, and as such, her head mold was used again and again.

Other dolls that use the Misty mold: The Misty mold proved very popular, and Ideal used it for Miss Clairol, Wonder Woman, and a few others.

Tammy’s boyfriend Bud: Reportedly, he looks a lot like Ted, but with a smaller head. They are easy to confuse with one another, and even came with similar outfits. Bud, however, was a Montgomery Ward exclusive and seems to be extremely hard to find. From the blurry picture I have seen, Bud doesn’t appear to be as smiley as Ted.

Pepper’s friend Salty (Pos’N Salty): A short, freckled boy who is friends with Pepper. Salty is a hilarious name, and he has a very sweet face.

Pepper’s friend Dodi: Goofy-cute with a big, almost “Joker” smile, and eyes looking dramatically to the side. For some reason, when she shows up for sale on websites, she is often missing hair plugs.

Pepper’s friend Patti: Another nine inch tall girl, she was an exclusive to the Montgomery Ward department store.. She usually had straight brown hair with bangs, and had a rather shrewd expression on her face. I have never seen her for sale.

Tammy’s “cousin” Sindy: Dollmakers in the UK wanted to make a competitor to Barbie, but ended up being inspired by Tammy instead. Sindy lasted for decades — including in a lawsuit-provoking, too similar to Barbie form. She is now back in properly retro form! 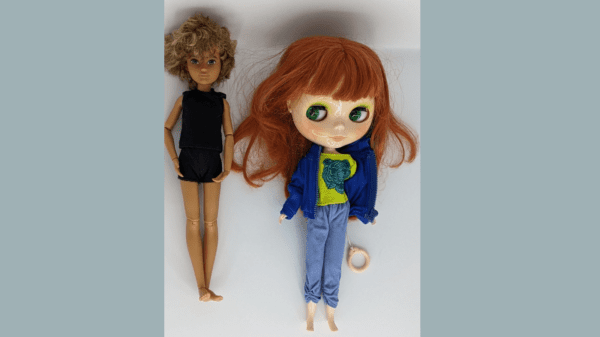 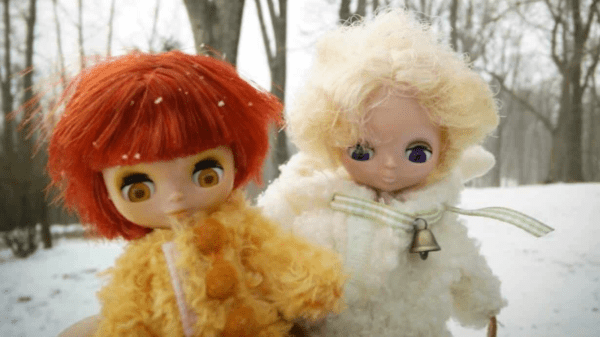 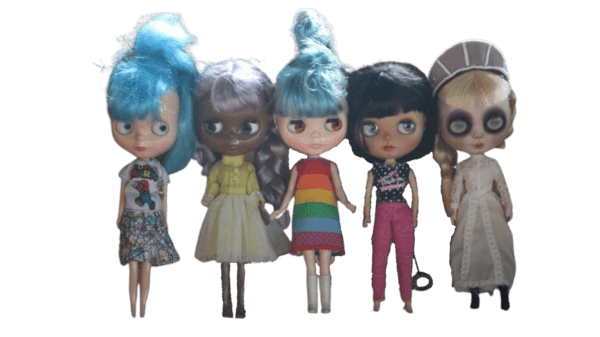